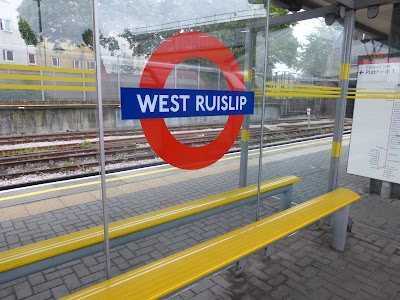 It has taken exactly two years for me to visit, photograph and write about all the 49 stations on the Central Line. The Line covers 46 miles and has the longest continuous journey on the Underground from Epping to West Ruislip at 34.1 miles. I estimate that I walk on average  5 miles per station. In Central London it would be less as there is so much to see in close proximity to the station. However, once away from the centre I do walk much further to find places of interest or, as in some places, I get carried away by the surroundings and end up doing a much longer walk than I anticipated. For instance walking back along the canal from Greenford into Central London, a distance of about 9 miles. The weather was so perfect for a canal walk that I couldn't resist. My legs did object to that the following day! 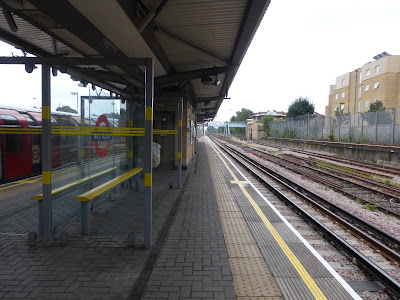 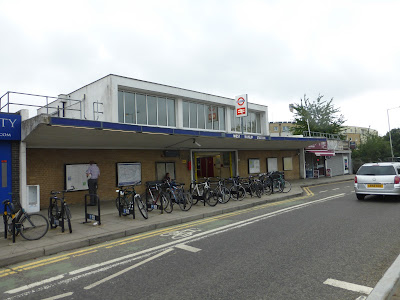 The station used to be called Ruislip and Ickenham when it first opened in 1906. At that time it was part of the Great Western and Great Central Joint Railway. When the extension to the Central line opened in 1948 the station was known as West Ruislip. The station has four platforms, two for the Underground and two for mainline services to London Marylebone and Gerrards Cross. A parliamentary train used to run once a day from Paddington to West Ruislip but it now passes through the station without stopping. These trains, often referred to as 'ghost trains' were a legal requirement to keep a station open. Legislation used to require that one service be run once a day on every railway route in the UK. These trains are still run to prevent the cost of formal closure of a route or station. 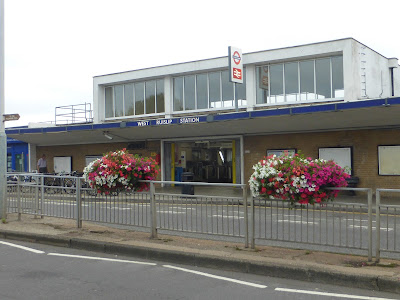 The last station on the line is not a spectacular one but at least, outside,  the frontage has been improved by the flower displays on the Central road barriers. 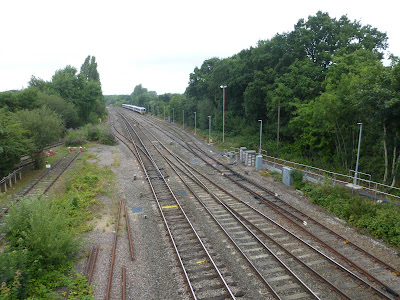 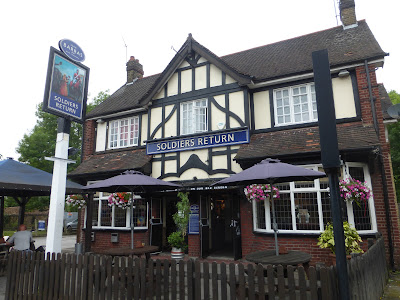 Built in 1828 it was originally a cottage and blacksmiths but was converted into a pub in 1850. The name 'The Soldiers Return' came from the days when soldiers would return to the nearby RAF base at Uxbridge to convalesce after active service. 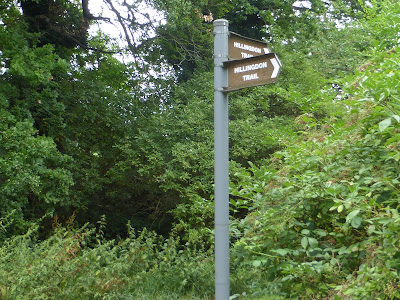 Just passed the pub was a sign for the Hillingdon Trail which I had to follow, of course. The Borough of Hillingdon is London's second largest Borough and has more than 200 parks and green spaces. The trail is a 20 mile path taking you through Hillingdon's countryside. 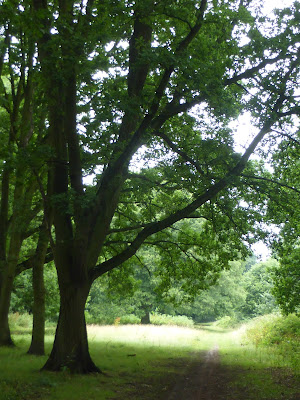 It looked a delightful walk passing through woods, meadows and fields but unfortunately I didn't have the time to explore it. I followed it as far as Ickenham Cricket club and back out onto the road. 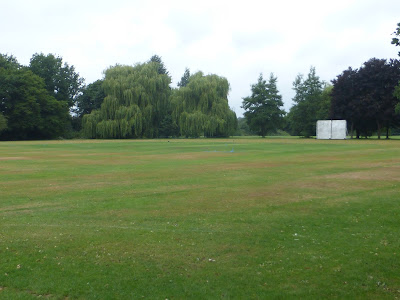 This is a very leafy suburb of London and from the housing appears more up market than the previous couple of stations. 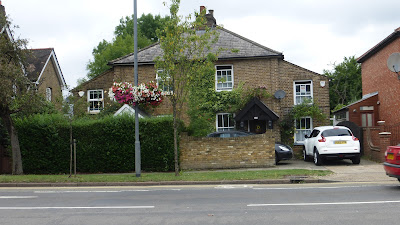 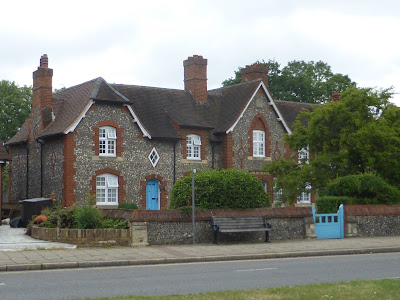 There is a mixture of new and old but the common feature is the greenery and well established trees. 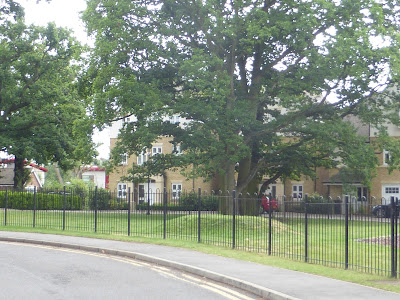 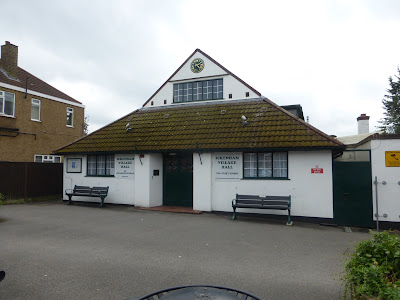 The station is not that far from Ickenham High Street so I decided to walk a little further to have a look. At almost 100 years old the village hall  has had many uses. From a  a temporary village school to a restaurant during WW2. It has also been used as a bank and a polling station. 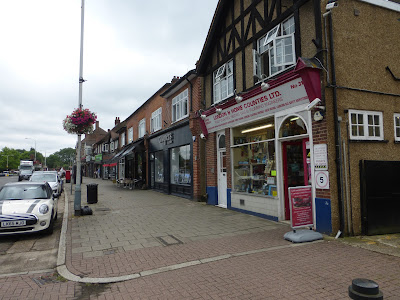 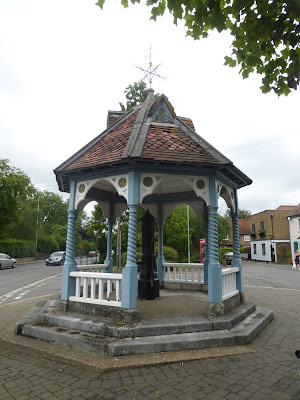 In prime position is this water pump. Originally constructed in 1865, it was in use until 1914. The inscription reads 'This well was sunk and the pump erected by the executors of the late Charlotte Gell, widow, who died on the 14th November 1863. After a long residence in this parish Mrs Gell by her will, desired that this pump should be dedicated to the use of the inhabitants of this village forever.' 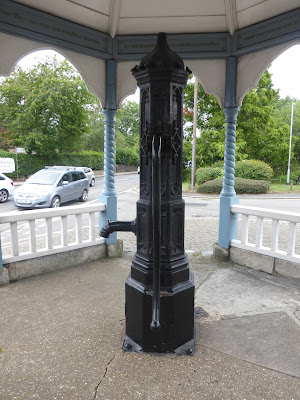 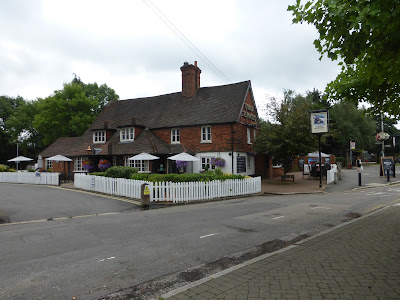 The coach and horses pub has some parts dating back to the 17th cent. It used to have a blacksmiths next to it. 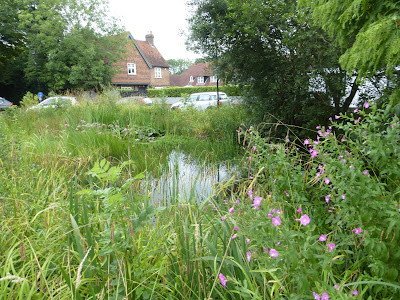 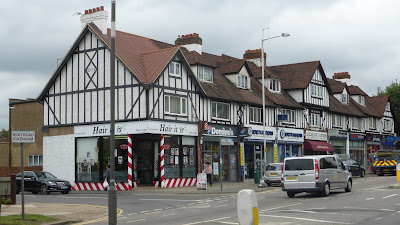 I wandered back to the station passing this row of mock Tudor shops which completed my last walk on  the Central Line. Having visited all the stations on the Bakerloo and the Central line I have   to 73 Underground stations  so that just leaves me with 197 to explore! 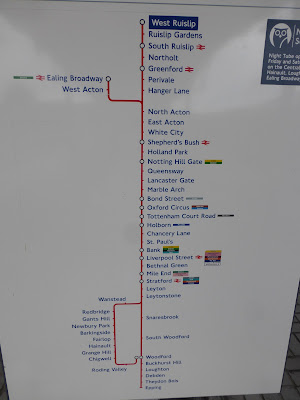